There aren’t many games that focus exclusively on robbing houses and businesses, which is why ZPLAY decided to make one. Idle Robbery Mod Apk is a game where you simply have to rob as much stuff from a house, bank, or business as you can before the cops arrive. Don’t get caught, otherwise you’ll behind bars for the better part of your adult life. If you can pull it off, then the rewards are huge.

Park your getaway truck outside and unleash your crew on the sleepy house to rob it blind. Take everything that’s worth a few hundred dollars and drive away with loads of cash. How rich will you get off of your next heist?

There are a few simple tips that you should follow when playing this game to make sure that you’re getting the maximum benefit every time. On top of this, there are some things that aren’t worth doing in the early levels when you’re only robbing houses and cafés – save the big muscle for the later levels when you’re robbing banks and the like.

In the first few missions, you’ll only have a small crew and you’ll be robbing houses and cafés. These levels are easy and you won’t make that much money. Blitz through these to get to the later levels, where your missions will be more exciting. Be careful, though – you want to make as much money as possible in the early levels to ensure that you can upgrade your crew and add more members with bonuses that will make robbing banks possible. There are some good tips to follow to do this.

If you want to earn big money at the end of every level, then you can watch an ad to triple your ‘end-of-level bonus.’ You get this after the end of every level and watching the ad can bring in that big money that will help to you breeze through the later levels. It’s definitely worth doing this in the early levels to get you ahead in the middle of the game. It’s also worth doing in the later levels just because the bonuses can get so big!

There are several upgrades that you can make to your crew – the main ones that you should be focusing on are strength, speed, and numbers. These should really speak for themselves, but strength allows your men to carry more gear, speed lets them rob the place faster (very useful), and numbers adds more men to your crew. This will also come in really handy. Try to get these upgrades in after the first five missions to maximize their benefit throughout the game.

You’ll have the option to level up frequently throughout the game. Don’t wait around, get on with it and you’ll earn more money per heist. It’s certainly worth reaping these benefits early on.

These are essentially just ways to get you to watch more ads, and there are a lot of them throughout the game. Still, having an extra guy on your crew in a difficult mission can be worth the 30 second ad. If you’re in need of the extra muscle or bonus, then we do recommend that you accept some of these offers. They’re free, after all.

This is where the game gets really interesting. You can hire specialists to help you get through difficult missions because they have a particular bonus like unlocking a vault that will come in very handy. These guys aren’t really worth paying attention to in the early missions because you’ll only be robbing a house or something like that – keep them for the later missions.

You get one specialist for free, then you can hire two more by watching ads (ads, yay!). You can also spend gems on them. Gems can be purchased for real money, so this is really on you. Still, watching a cheeky ad for the right specialist in a later mission can make the difference between winning and failing a level, or making bank and going broke. Choose wisely.

As the name of the game suggests, you can shut the game and have your men commit more robberies in the background while the game is idle. They’re rob at a slower pace, but they’ll still be working. Try this to earn more money when you’re down on your luck, or just to maximize your returns over time.

If you really want to commit robberies with ease, then download the unlimited money or gems mod to get easy bonuses and a solid crew with specialists. It’s easy and free. 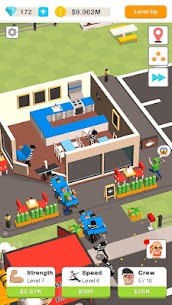 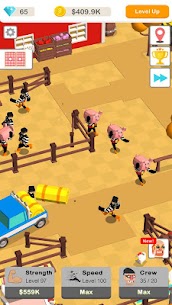 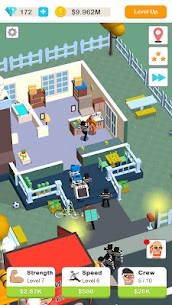